Recover files deleted from your smartphone 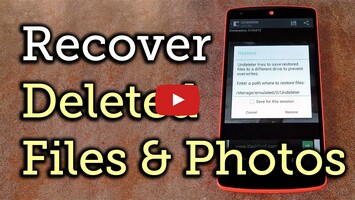 Advertisement
Undeleter is an app that, as its name indicates, lets you recover files and documents you thought were gone forever. It also gives you the possibility to permanently destroy any type of file, so that they can never be recovered using an app like this one.

The interface in Undeleter is clear and organized. Its three main features are perfectly separated: restore files, restore data, and destroy documents. With the first one, you can recover images, audio, or video files that you've deleted from you device. The second option lets you restore data from other apps and SMS. The third feature lets you permanently destroy any file stored on your Android.

Undeleter is one of those apps that you hope you'll never need to use ... but could come in handy from time to time. That's why it's a good app to have just in case you ever need it.
Recover accidentally erased smartphone pics with Undeleter

The drama of losing files on your phone is a constant threat for people who don't use automatic backup services. Whether you've accidentally erased your pictures or you need to restore the manufacturer settings on your device to solve some other problem, there are ways to get back your information with special apps designed to do just that. Undeleter is one of the best of these apps that you can find.
See more

Uptodown App Store
All the best free apps you want on your Android
SHAREit - Connect & Transfer
Send your files quickly and easily
Xender
Transfer files and share applications
Google Play Services
An indispensable app for keeping your apps updated
TutuApp
An alternative market for Android
DualSpace
Two accounts, one app using a single smartphone
HACK PUBG
Hacks for this online battle game
GameGuardian
Get a leg up in your favorite video games
Advertisement